My Summer with the Birds of Madagascar 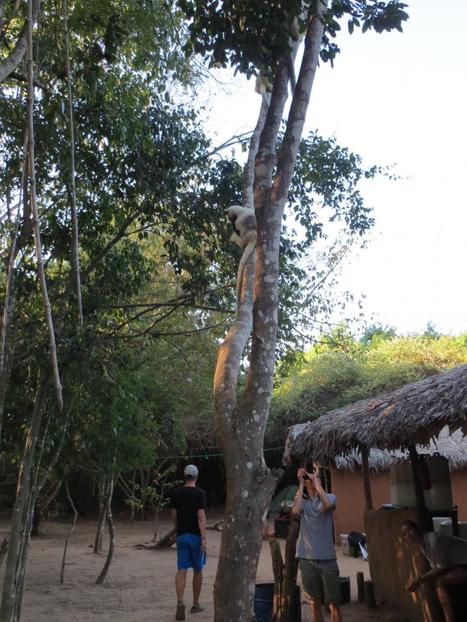 Coquerel’s Sifakas regularly visited the camp.
​This summer I spent 6 amazing weeks working with biodiversity survey teams in Madagascar. Although I have been lucky enough to spend most of the last 10 years living and traveling around Europe, I had very little experience traveling to remote and rural locations, so camping near the edge of the Mariarano Forest in a remote corner of a developing island nation was quite an eye-opener for me.
When I made the decision to go to Madagascar, I was a student taking all my classes online. Studying online is very convenient and I mostly love it, but when you are studying subjects like wildlife and natural resources, there is something lost when you spend a lot of time indoors in front of a computer. You can read books and watch documentaries about a place, but it’s not quite the same as physically being there. I was looking for opportunities to gain fieldwork experience and came across Operation Wallacea’s website (www.opwall.com). What I liked most about Operation Wallacea was that their work is conducted at a high academic standard, which attracted researchers and students from the world’s leading universities, but they were also very committed to the communities they worked in.
Operation Wallacea (also known as Opwall) offers fieldwork expeditions in 10 different countries—university students can either join for 2-4 weeks as a research assistant or 6-8 weeks (depending on location) as a project student. Students pay a fee which includes camping accommodation, meals, and training. Of all the locations available, I was most intrigued by Madagascar because of its unique endemic wildlife, and it also happened to be the best site for GIS and landscape ecology projects, which were my primary interests.
Once I signed up and paid my deposit, there were a few things I needed to do in the weeks and months before the expedition. Although Opwall provided tents and meals, there was a detailed kit list which included everything from hiking boots to anti-malarias. The one item which turned out to be quite important was a good headlamp, especially if one wanted to join any night surveys. I found a high-lumen GRDE headlamp for about $20 on Amazon which worked so well I regularly loaned it out to others with lower powered headlamps.
I also needed to arrange academic credit through Oregon State—my advisor helped me with the paperwork for NR 406 (Projects) and I found a faculty member to mentor and grade the assignments I would submit once the project was over. I also applied for funding through the College of Forestry’s Experiential Education Fund and the Dean’s Investment Fund. Even though I was a part-time distance student who never met any of Oregon State’s staff in person, I was really surprised at how enthusiastic and supportive everyone was about my participation in this expedition.
All Opwall students arranged their own flights into Antananarivo, Madagascar’s capital city. Once at the airport, our wonderful guide Armand helped us get situated. After spending a night at a hotel near the airport, we embarked on a 2-day road journey—the first day we traveled across the central highlands of Madagascar to the city of Mahajanga, and the second day was in 4x4s to the campsites. The campsites are themselves like little cities, with camp managers and staff to prepare our meals and keep everything running. “Showers” involved buckets of cold water and we missed many modern conveniences, but otherwise we were comfortable and well taken care of.
The camp managers kept a schedule of each day’s surveys and any other events like lectures and socials. Every day there would be several surveys going on including herptiles, lemurs, inverts, and birds. All surveys were open, so each day I was free to join any survey I wanted and many students made a point of joining each survey at least once during their time there.
My project involved birds, so the two most relevant surveys for me were bird point count surveys and mist netting surveys—both equally interesting but very different. Bird point count surveys involved walking down a route and stopping at pre-determined points to observe and record birds. Most birds weren’t actually visible, so we had to identify them by song which was very challenging at first, but the ornithologists were very keen to teach us. For mist netting surveys, the bird team would set up mist nets at a location (which would rotate every 2-3 days) and spend the morning catching birds, recording their measurements, banding them, then releasing them. This was a great opportunity for us to handle birds and see them up close. Most of the birds caught were common species, but every once in a while a surprise would land in the net—one morning I was lucky enough to hold a Madagascar Scops-owl. To be able to handle such a beautiful creature and contribute to its conservation was definitely a once in a lifetime experience. ​​

Have a specific project or destination in mind? Talk to us!