​A student in Forest Engineering, Jacob Brint was interested in studying abroad for a term, but wanted to study somewhere that spoke English. An adviser suggested he study for a semester at the University of Bangor in Wales. 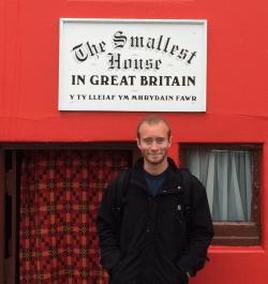 Founded in 1884, University of Bangor is one of the oldest in the UK, and is among the top 2% of higher education institutions globally. The university is uniquely small—with about 11,000 students, 2,000 of which are international. Most of Jacob’s classes were independent study, meeting 1-2 times per week and with only about 15 classmates— quite a big change coming from OSU. The town of Bangor itself was a lively, exciting place to be, so there was always an opportunity to meet someone new! In fact, during his first weekend abroad, Jacob met some men on leave from the British army in a pub, and was able to talk with them for the evening.
When Jacob arrived, he found it easy to adjust, as the university offered a welcoming program for all the international students (similar to the “Start” program at OSU). He arrived two weeks before classes began and the rest of the students arrived for this orientation. All the international students were split up into their different majors and colleges, so it was a great way to make connections with other international students who shared his interests.  Jacob ended up befriending students from Germany, Norway, Canada, as well as other states in the U.S., and the group traveled together often on their days off from classes.
Jacob stayed in the university’s dorms—which were more like apartments shared by 8 students, each with a private bedroom and bath. What was interesting about these dorms, was that in each apartment there were at least 2 international students and 6 Welsh. This ended up being a great situation, as his roommates from Wales were able to give him advice about where to travel and how was the best way to get there.
During his time in Wales, Jacob did quite a lot of travelling; he made various trips to castles on the weekends, as it was very cheap and easy to travel by train and ferry.
"One of my favorite parts of being over there was all of the history. In the US we have history that is at most a few hundred years old. [But while I was abroad] I visited English castles that were built around 1000 A.D. by Longshanks (the king from Braveheart) and Roman ruins that were built around 6 A.D. That sort of history is something you don't get here. "
Jacob enjoyed learning about the history of each castle he visited, and was even able to see some Roman fort ruins while he was abroad and learn about their history. One weekend, Jacob had the opportunity to meet his dad in Barcelona and see the sights and beaches in Spain. But possibly the most memorable trip Jacob took was during a four day weekend off of classes. Jacob and another international student from Boston traveled to Dublin for the break, and were able to visit the cathedrals and experience life in Dublin and talk to the locals, experiencing the different cultures around Europe.
Jacob found that Wales itself was very different from America in both culture and structure. All their buildings were made of stone, as there is very little forest area in comparison to Oregon (only about 15% of emerging forest area in total). Additionally, each town he traveled to spoke in a different accent with different slang and dialects, so at times it could be difficult to communicate even though they speak English!

I encourage students who are thinking about travelling abroad to do so, as it forces you to learn how to figure things out on your own, and it gives you the exciting opportunity to meet people from all over the world, and learn about different cultures and ways of living.

Find a program abroad that fits your schedule