​A Year in France 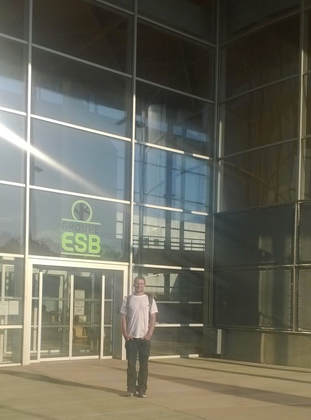 ​I studied for a year in Nantes, France at the college of Ecole Superieure Du Bois, as part of their International Timber and Trade Program. I was initially interested in studying in Europe because of how different the wood product industry operates in the EU as compared to the US, and when this college came to OSU interested in forming a partnership, I learned more about their Wood Sciences program and saw that this university had everything I was looking for: a reputable Wood science program in the heart of Europe. I’ve always had a desire to travel and expand my knowledge of the world, and this opportunity came to me at a great time when I was able to do so.
When I first arrived at the airport, I was greeted by my tutor (a “buddy”, a French student from ESB assigned to help me with anything and everything I may need for living and getting situated) who took me right to my new dorm—equipped with a kitchenette and bathroom—, then to the school to meet the faculty and some of her friends. She was really a lifesaver! She helped me set up a bank account, get my monthly bus/tram pass, sign up for their health care system, and so much more! I found that this made being abroad a quick and smooth adjustment.
One thing that I found interesting and so different than what I was used to was the French culture—I had heard a little about it prior to leaving, but I didn’t think it would end up being quite so shocking. There are so many small differences that it is hard to put my finger on, but one is time! I wouldn’t say they are late to everything, but time seems to play a less important role to them. First and foremost, anything before 8am won’t happen, don't even try. Then, when someone schedules a meeting, it's normal for people to show up 5-10 minutes late, then grab a coffee, talk, and actually start the meeting 15-20 minutes later. Culturally, time is seemingly less important. In addition to time, coffee is a staple to their day. Granted, they are much smaller, more like an espresso, but the French will drink 2-3 in the morning, and then again after every meal! This was a very easy one to get used to, but it was funny to me at first how much coffee everyone drinks every day.
While being abroad, everything is exciting! Being my first time in Europe, the ability to travel and see historical building and artifacts around every corner was quite intriguing. I was in Paris for Christmas, jumped on a bus, and was in Barcelona for New Years. It's just that easy travel and be in a completely different place in just a few hours. 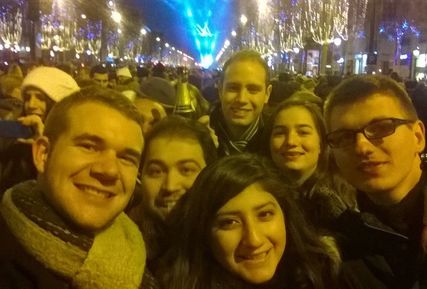 Some friends and I took 10 days for an Italian road trip of about 3000km. During this trip, we drove from Nantes France, to Milan Italy, then Venice Italy. After Venice we drove to Florence, stopping for a few nights in a hostel at each location. Lastly, we visited Pisa on our way home, stopping in Lyon to sleep for a night.I have also traveled from Nantes to Paris by a ride share program that is very popular in Europe— cheap too. A few friends and I were able to spend 8 days traveling France for a relatively low price. After these 8 days, 4 of us bought bus tickets to go from Paris to Barcelona. Barcelona was very warm compared to the frozen days in Paris, a welcome change. After spending 3 full days in Barcelona, we took a 14 hour bus ride back to Paris, and then to Nantes for school the following day.
I had another business trip planned by the 20 students in my class. We visited 8 companies total in the north of France and Belgium. We organized to travel by train to Lille, France, and rented a house that could sleep all of us for 4 nights. Each night, after our visits, 1-2 different nationalities were responsible for cooking dinner for the entire group. This was a really fun and delicious way to experience a part of our classmates’ cultures.
My decision to study abroad has been the single most important educational and life decision I have made for myself. It is a character building experience unlike any other. The hardest part is making the decision to go through with it, but it's all fun and exciting after that! ​