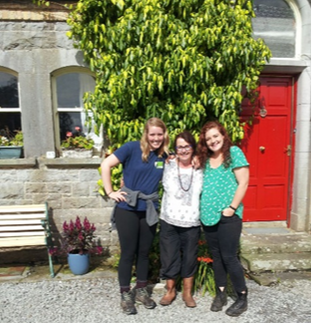 Blair Ruffing, a Natural Resources major who created her own specialty in soil resource economics, spent six months abroad in Ireland in 2016 . She interned at the Jampa Ling Tibetan Buddhist Meditation Centre, where she worked in their organic farm, then she journeyed to Cork, where she spent a term exchange at the University of Cork.
Blair’s internship was easily applicable to her studies and extracurricular activities as she had been a part of the Organic Grower’s Club working on the farm here in Corvallis. At the Centre, she worked in their garden, planting starts for a variety of fruits, vegetables, herbs, and flowers, while also helping maintain the aesthetic appearance of the garden for the Centre’s visitors. She also learned all about the different types of Irish soils and the beneficial uses of gardens for people, wildlife, and soils! After the internship in County Cavan in the north, she visited family in Dublin before heading even farther south to the city of Cork.
At the university, she took part in the Harry Potter Society, was a member of the college rowing team, and even started learning the Irish language. She also explored Cork’s restaurants and pubs, celebrated Friendsgiving with her new friends, visited many other cities like Galway and Kerry, and made a weekend trip to London!
While Blair often defines herself as more of an introvert, she found she was able to open up and make many new friends and go adventuring as often as she could. Her schoolwork also made this possible as there was simply less of it during the week, freeing up her schedule. Scheduling at the beginning of the term turned out to be a new challenge for her to work through as she discovered the differences between the Irish university system and OSU. It was a bit of a struggle to adapt to the more laid-back atmosphere that did not involve her schedule becoming official until the second week of classes or receiving syllabi on the first day. Slowly, however, she felt herself adjusting to going with the flow and getting used to that way of doing things.
After she returned and had time to reflect back on her time in Ireland, Blair felt herself easily re-adjusting to “normal” life in the States. This was a different experience for her because after previous trips abroad, she usually felt some culture shock when coming home, if even just when driving for the first time in a while. She claims this time was different because she realized that her journey is not over. She knows she will see her new friends again and that she will definitely be returning to Ireland and Europe in the future. Her international experiences are just getting started.

Find your next adventure