A Day in the Life: Ben Carson 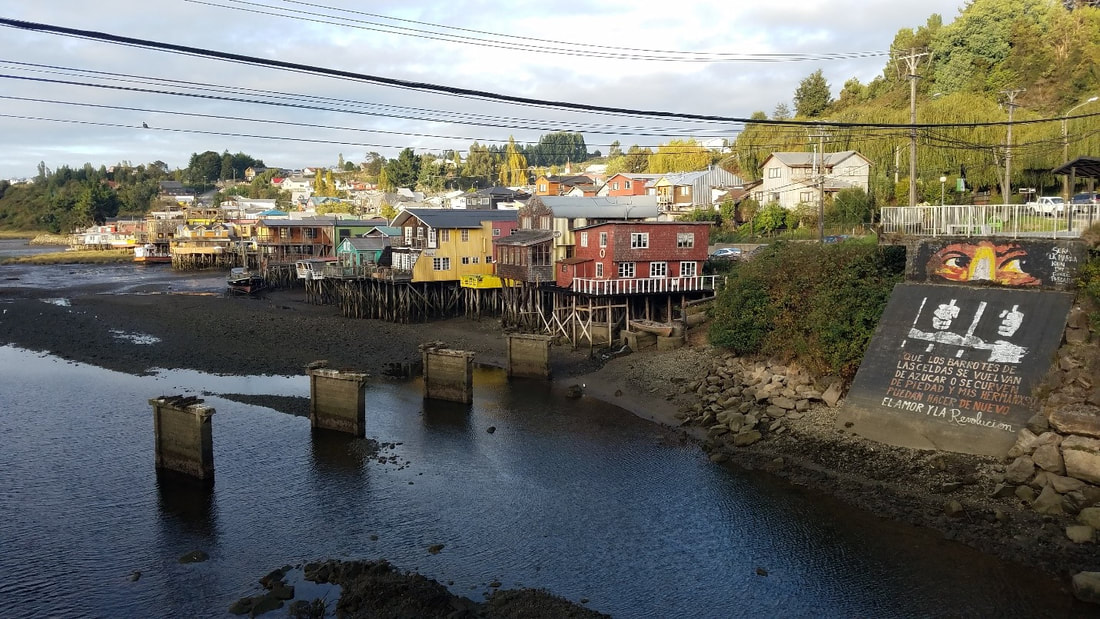 Castro, Chiloe Island, Chile
​Back in my palafito, I will make dinner and work on my schoolwork. I’m able to listen to music on a small stereo that was already in the palafito when I moved in while I read for leisure. If I was lazy and didn’t stop for food, I always have the option of heading downstairs to El Astillero pizzeria. Not only is the pizza there delicious and made with fresh, local ingredients, but when I’m upstairs the stone oven keeps my bedroom warm and the smells of fresh pizza waft in and put me to sleep.
The other half of my time is spent in the field, which are the best days. After breakfast I usually wait for a coworker to pick me up in a work pickup. Early in the internship I was often working with Nicole and Nicholas, a woman from Santiago and a man from France that relocated to Castro, respectively. Nicole only speaks Spanish, while Nicholas has some limited English, so the 30-minute to 2-hour car rides with them were the best time for me to practice Spanish. Of all the people that don’t speak English, Nicole’s Spanish is the easiest to understand. The three of us would chat about our weekends, movies, work, and other miscellaneous topics. The drives out to the experimental sites were always pleasant and a great way to wake up and get in a Spanish-speaking and science-focused mindset.

Eventually, we pull off the main highway onto a gravel road until we get to the farm adjacent to the experimental site. We greet the owners and begin the short walk through fields of llamas and sheep, into the nearby evergreen forest that is filled with tepa, luma, canelo, and tineo trees. At this site, there are roughly 80 plots with 15 ulmo or avellano saplings each that were planted four years ago. Our goal is to find each one, measure the height, diameter, and health of each one, also noting any evidence of browsing by pudu or damage from insects. At this point in the internship I acted as the scribe, listening carefully as Nicole or Nicholas called out numbers, while simultaneously searching for the next plant to be measured, as they were often difficult to find. Again, this was good Spanish practice for me, particularly in learning numbers. Weeks later, I still have Nicole’s voice and cadence in my head, “Altura inferior viente y ocho, diámetro treinta y cinco punto cinco, vitalidad dos, si ápice muerto, si brote pical, si ramoneo, no insecto, si clorosis”. 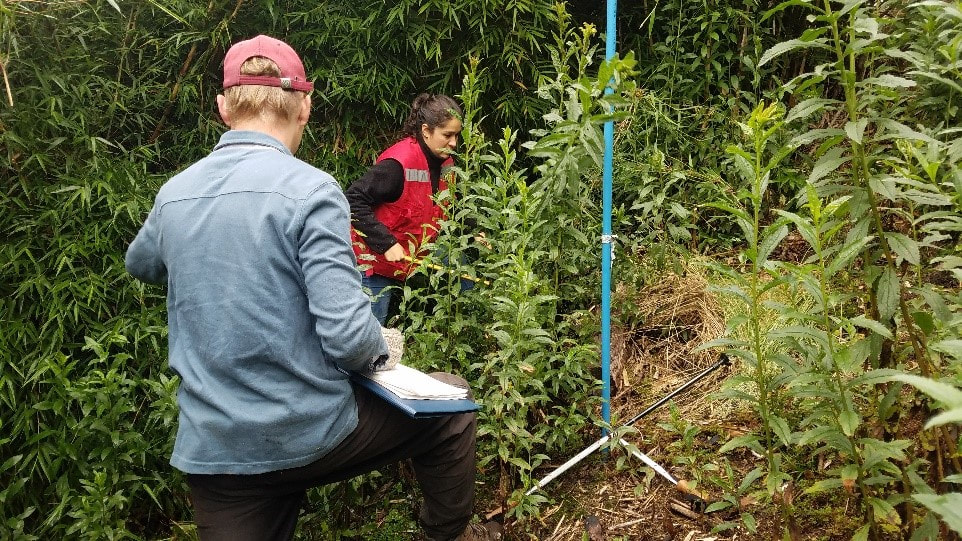 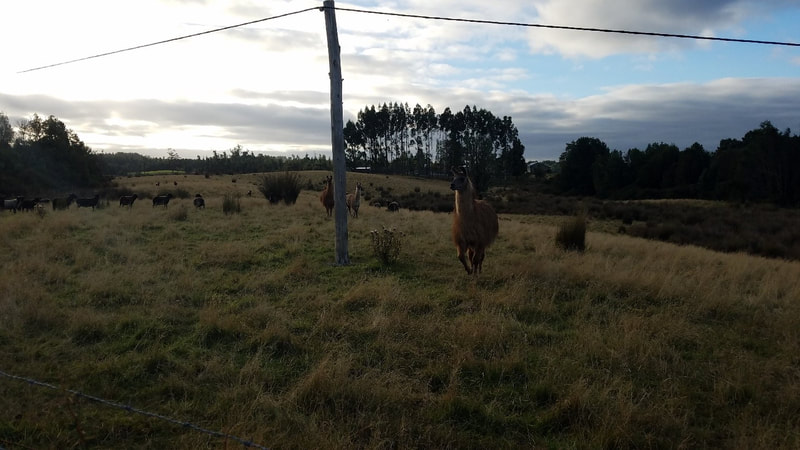 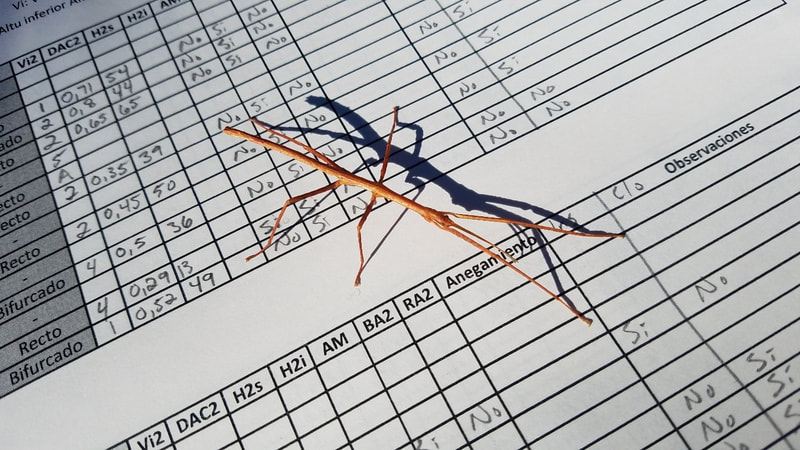 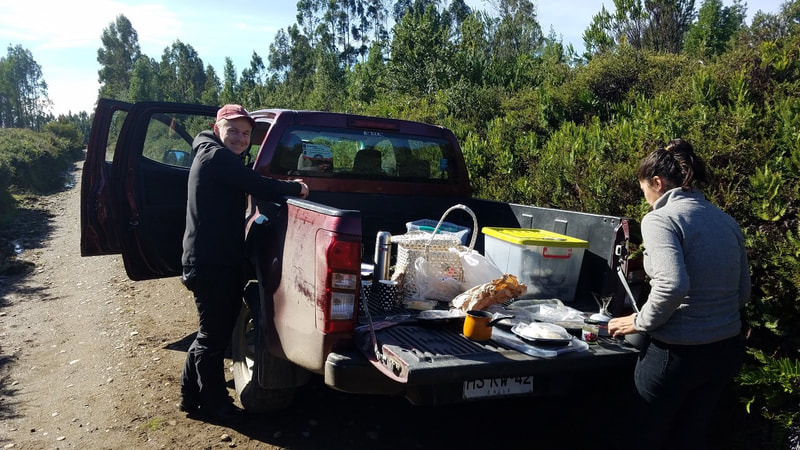 Some days in the field Nicole would pack a lunch which we would cook on the back of the truck with a compact camp stove, but other days we would head to a small truck stop for a simple but delicious meal of meat and potatoes. Even after another cup of coffee, it was often difficult to get started working again, because the meals were usually heavy and encouraged a nap. But we pushed through those feelings each day and often completed more plots than we planned for.
After a pleasant and restful drive back home, my day would end the same as it would after a typical day in the office, with the added satisfaction of tearing off my rubber boots and rain pants. Those nights usually ended early as well, because I was so exhausted after a full day of exercise hiking up and down steep slopes, not to mention the mental exercise of speaking and listening to a language that is completely new to me.

Every day is something different and even if I’m stuck in the office I’m guiding myself in what to focus on, what will be most beneficial for INFOR, and what interests me. Obviously, days spent in the field are more fun because working outside is almost always more fun than sitting in an office, but everyday was enjoyable in one way or another.
​The INFOR office in Castro is full of some of the nicest and most generous people that I’ve ever worked with. A huge thank you to everyone there for the opportunity and support! 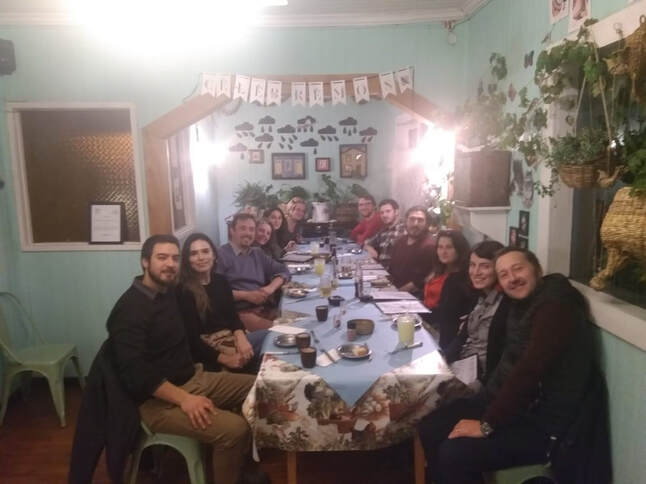 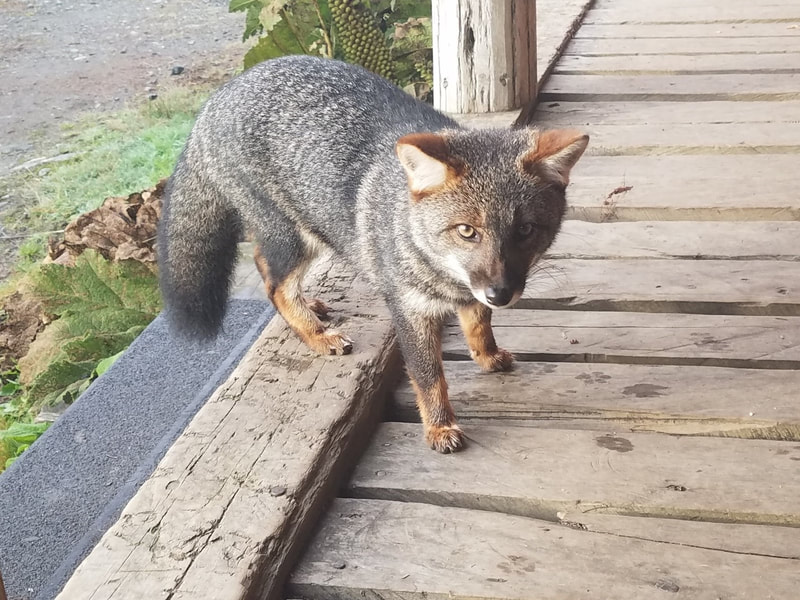 An endangered (and hungry) Darwin's Fox at Parque Tantauco 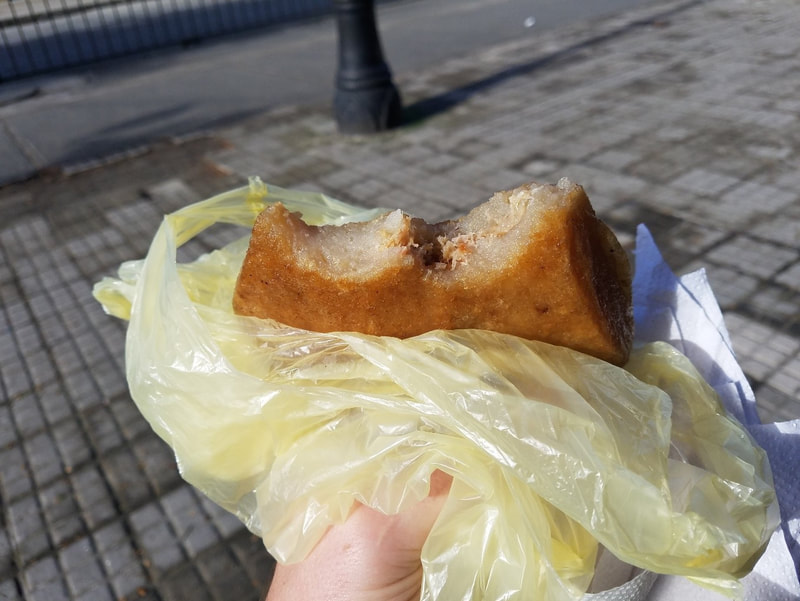 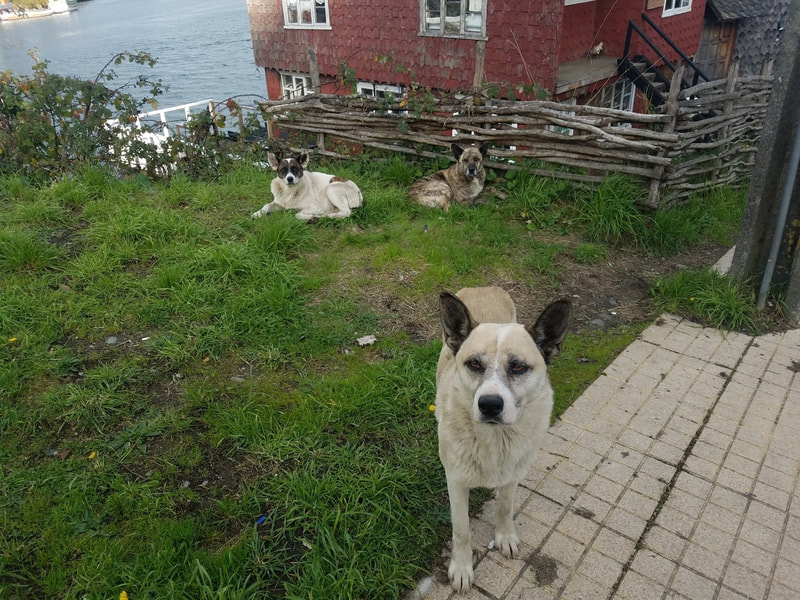 The friendly strays found around Castro 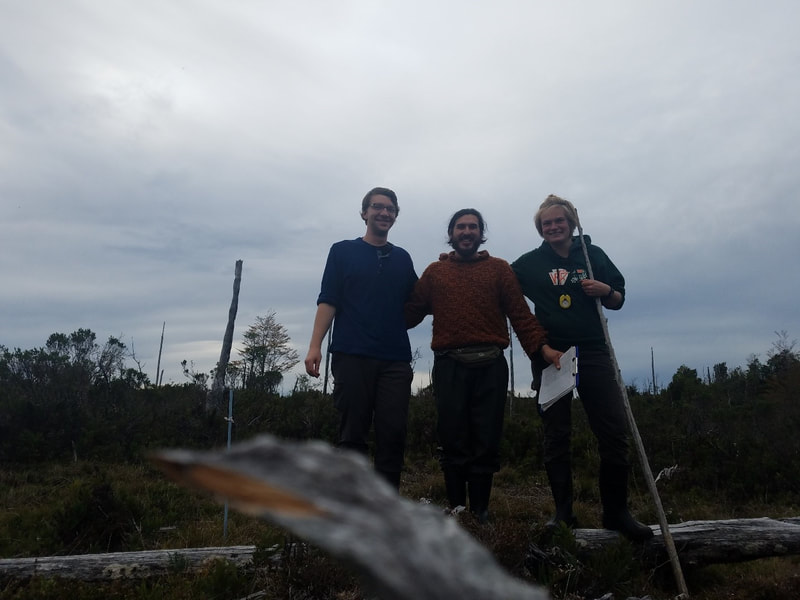 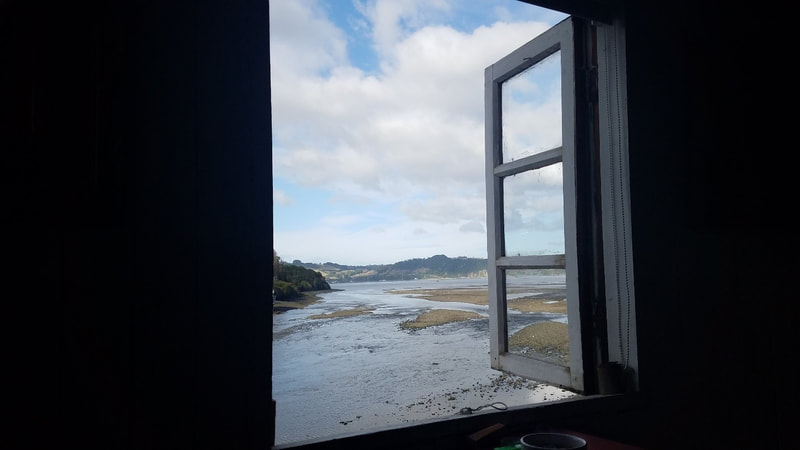 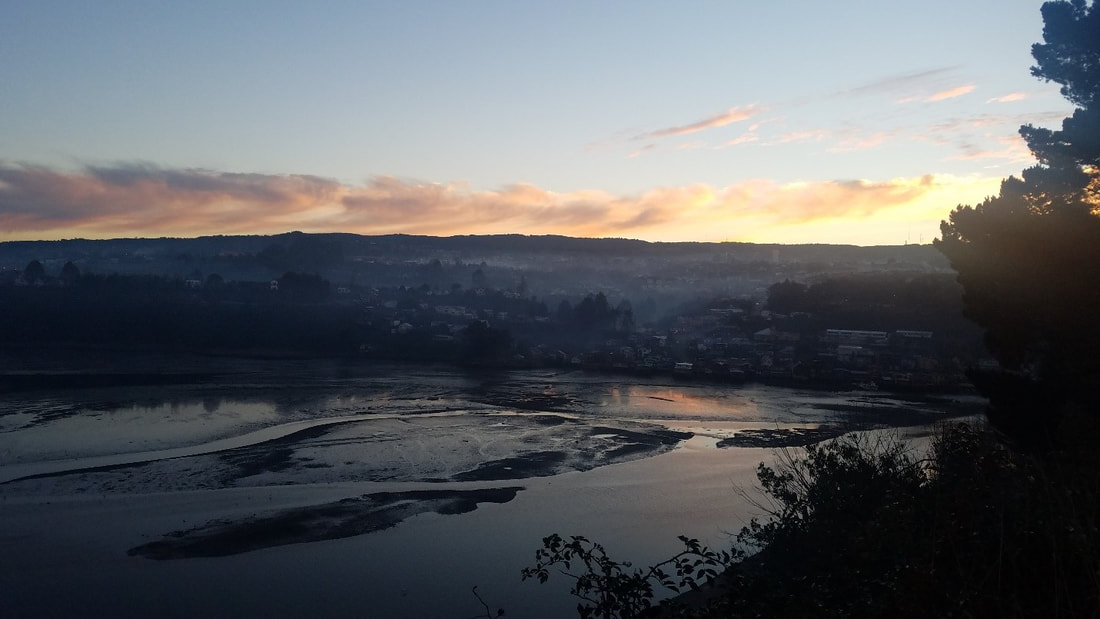